Swansea Bay Business Club appointed a new president when they met for their AGM last week, who pledged to build upon the Club’s success as an effective voice for South West Wales businesses.

Hayley Davies, CEO and Director of South West Wales law firm JCP Solicitors, takes up the role of President for the next two years, having been a board member of the Business Club for a decade.

Paul Gardner of Prescott Jones has been appointed the Club’s new Deputy President and outgoing President Bruce Roberts returns to the role of Secretary, a post he has held since 2006.The appointments were announced at the Club’s recent Annual General Meeting held at Swansea’s Village Hotel.

Also raised at the AGM was the intention for Swansea Bay Business Club to put an extra emphasis on formal networking opportunities for its members and to continue its good work raising money for charities – the Club’s charity for the next two years will be children’s palliative care specialists Ty Hafan.

Hayley said: “Swansea Bay Business Club is going from strength to strength and it has proved itself to be an effective and valuable resource for local businesses. I look forward to seeing the Club extend its reach and its influence in the future and I will try to approach my tenure as President with the same level of enthusiasm and commitment our outgoing President, Bruce, has shown over the past two years.”

Bruce Roberts said: "It has been a pleasure to be part of the ongoing growth of Swansea Bay Business Club. I am quite pleased that during my tenure as President we raised almost £15000 for MacMillan and that we were able to set up a Policy and Academia group to enhance our role within the business and public sectors, which in turn allows all of our members to have a voice on issues which affect them as business men and women. I am very happy to be passing the baton on to Hayley, whose drive and whose positive attitude has been an asset to the club for many years.” 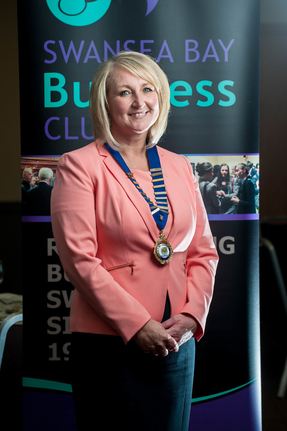